Felix the frog story is an oldie but a goodie, it has been around for years. I first read this story in the 1990’s and it is believed to predate the modern internet. The author is unknown. The story is reproduced below, but essentially, it tells how a man named Clarence tries to teach his pet frog Felix, to fly.  Of course, initially, his efforts are met with failure.  But, Clarence has been to many management and self-help seminars and he is armed with all of the tricks to improve performance.  He has Felix think positive thoughts.  He has him set goals.  He challenges him to overcome his limitations.

And through it all, Felix continues to fail.  Not just a little.  He is an utter failure, at every single task.  Clarence understands the value of pushing your employees to excel, so he continues throwing Felix out of progressively higher windows.  And it’s not like Felix wasn’t trying.  He wanted to improve.  The result of the failure is completely attributed to Felix not trying hard enough.

The story, obviously is a metaphor for business.  But, it sends a different message than many of the self-help guides.

Instead of a message:

“You can be anything you set your heart to”

“you simply can’t do certain things”

This is particularly relevant when delivering complex projects where certain elements need to be considered and evaluated to ensure:

Once upon a time, there lived a man named Clarence who had a pet frog named Felix.  Clarence lived a modestly comfortable existence on what he earned working in the local mall, but he always dreamed of being rich.

Clarence, disappointed at the initial reaction, told Felix, “That negative attitude of yours could be a real problem.  I’m sending you to class.” So Felix went to a three-day class and learned about problem solving, time management, and effective communication… but nothing about flying.

On the first day of flying lessons, Clarence could barely control his excitement (and Felix could barely control his bladder).  Clarence explained that their apartment had 15 floors, and each day Felix would jump out of a window, starting with the first floor and eventually getting to the top floor.  After each jump, Felix would analyse how well he flew, focus on the most effective flying techniques, and implement the improved process for the next flight. By the time they reached the top floor, Felix would surely be able to fly.

Felix pleaded for his life, but his words fell on deaf ears.  “He just doesn’t understand how important this is,” thought Clarence, “but I won’t let naysayers get in my way.”  So, with that, Clarence, opened the window and threw Felix out.  He landed with a thud. 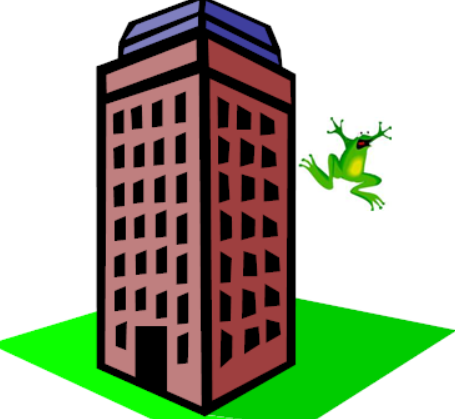 Next day (poised for his second flying lesson), Felix again begged not to be thrown out of the window.  Clarence opened his pocket guide to Managing More Effectively and showed Felix the part about how one must always expect resistance with the implementation of new programs.  Then he threw Felix out the window.  Thud!

On the third day (at the third floor), Felix tried a different ploy: stalling, he asked for a delay in the project until better weather made flying conditions more favourable.  But Clarence was ready for him. He produced a time line, pointed to the third milestone, and asked, “You don’t want to slip the schedule, do you?”  From his training, Felix knew that not jumping today would mean that we would have to jump twice tomorrow, she he just said, “OK. Let’s go.” And out the window he went.  Thud!

Now understand that Felix really was trying his best.  On the fourth day, he flapped his feet madly in a vain attempt to fly.  Of the fifth day, he tied a small red cape around his neck and tried to think Superman thoughts.  Try as he might, though, Felix couldn’t fly.

By the sixth day, Felix (accepting his fate) no longer begged for mercy.  He simply looked at Clarence and said, “You know you’re killing me, don’t you?”  Clarence pointed out that Felix’s performance so far had been less than exemplary, failing to meet any of the milestone goals set for him.

With that, Felix said quietly, “Shut up and open the window” and he leaped out, aiming carefully at the large jagged rocked by the corner of the building.  With this jump Felix went to that great lily pad in the sky.

Clarence was extremely upset, as his project had failed to meet a single goal.  Felix had not only failed to fly, he hadn’t even learned how to steer his flight as he fell like a sack of cement – nor had he improved his productivity when Clarence told him, “Fall smarter, not harder.”

The only thing left for Clarence to do was to analyse the process and try to determine where it had gone wrong.  After much thought, Clarence smiled and said, “Next time, I’m getting a smarter frog!”

As in the case of Clarence demanding that Felix the frog learn to fly, traditional approaches to project management practices often provide an insufficient mechanism for effectively delivering projects.  As organisations are in the middle of digital transformation, more innovation, thought leadership, high performing skilled and capable resources are required to meet the increasingly complex challenges that lie ahead.

Contact andersenIT today on 1300 428 248 to discuss a boutique project management solution for your organisational initiatives.